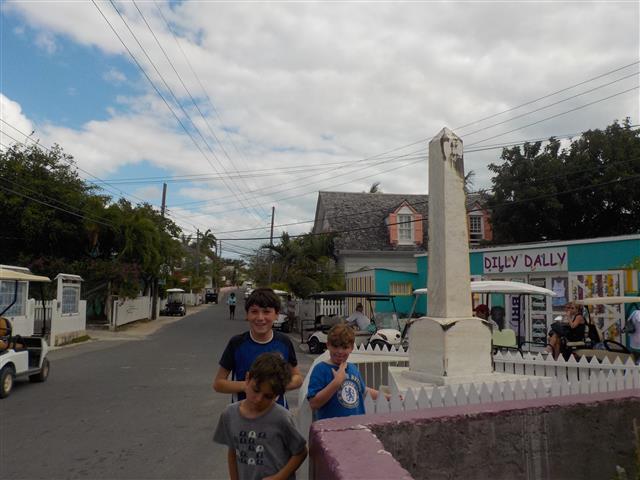 The Eleuthera group is a narrow chain of islands and the epicentre of the Bahamian commercial lobster, conch and fishing industry.  The main town is the very colourful Dunmore Town, which is a major tourist destination for the rich and famous.  After a great sleep in the calm harbour at Royal Island we headed through a very narrow channel called the Current Cut which has tidal currents up to 10 knots and can be very tricky to navigate depending on the tide.  Our timing was good and we had the tide pushing us through so we made a fast trip through the cut and then across the bay to anchor near Gregory Town on Eleuthera Island.  Apparently Lenny Kravitz lives here, although we didn’t spot him!  Our anchorage for the next couple of nights was famous for its view of the Glass Window – a bridge the spans a very narrow section of the island and looks exactly like its name, a glass window overlooking the Atlantic Ocean.  In big seas, huge waves can be seen crashing over the bridge, although for our visit all was very calm.

Glassy conditions, though a storm brewing

Our first morning outside the Glass Window was spent trying out the inflatable donut ring that Pete had recently discovered deep in one of the lockers in the cockpit. What a find!  The kids had a great time being dragged along behind our dinghy, and loved also going head first over the side checking out the bottom of the bay with their goggles on. In the afternoon, on the Atlantic side of the island (only about 100 meters from the bay we were anchored in) is a set of rock pools called the Queens Baths which was worth a visit.  We all had a good scrabble around the rocks and cliffs, before hitching a ride to Dunmore Town, about a 20-minute care ride by land, followed by a 15-minute water taxi across the water to Harbour Island.

Our lift to the water taxi was in the car of a very friendly local who made his money selling soft drinks and his own brew of Rum Punch to the tourist sites of the Queens Bath and the Glass Window.  Pete and I shared a couple of sips of his rum punch, until he gave us the details of his brewing methodology which made us both stop in our tracks!  We were very lucky to have struck up a conversation with him, as Pete had planned we walk to what he thought was the nearest town which whilst only a few miles direct route along the coast would have taken us about 3 hours to walk by the road, and then a 2 mile swim as it was on a separate island!   I am now getting more involved in planning our expeditions.

At Dunmore Town we were very keen to see the beach with “pink” sand on the other side of the island.  I think the boys were sadly disappointed, as the sand looked, well, white – until they tried my sunglasses on and got a hint of the pink that everyone had been talking about!  Regardless, it was a beautiful beach and probably a great place to hang at on a day a little less windy than the one we were enjoying.

We decided to stay another day at the Glass Window, relaxing, home schooling and swimming as the bay was so beautiful and we needed a bit of a break.  Boys were keen to hit the beach in the afternoon to try out their hunting equipment – Max and Tom a bow and arrows, and Ben, his crossbow.  We had gone to the Renaissance Festival in Fort Lauderdale, and these were the boys’ souvenirs from this amazing event.  I had been reluctant for them to have potential weapons, however they turned out to be great fun and everyone followed the rules of taking it in turns to shoot – no eyes lost on that day and all flora and fauna still living!  As the beach was empty we light a bonfire to finish off the day– nothing better than a fire for boys to throw things at to get rid of any last bit of energy.