We have spent four days at the Atlantis water theme park and hotel complex on Paradise Island off Nassau. It wasn’t till then that i realise that the kids terrible behaviour is probably a combination of lack of exercise and socialisation. They have played their hearts out. This place is fantastic. It has 10 different rides, multiple pools, great ruins to swim around, and for the parents any kind of food you like. The clientele are a combination of day trippers from the cruise liners, well-off families who come several times a year, and the Spring Break teens who seem to have more cash than anyone. 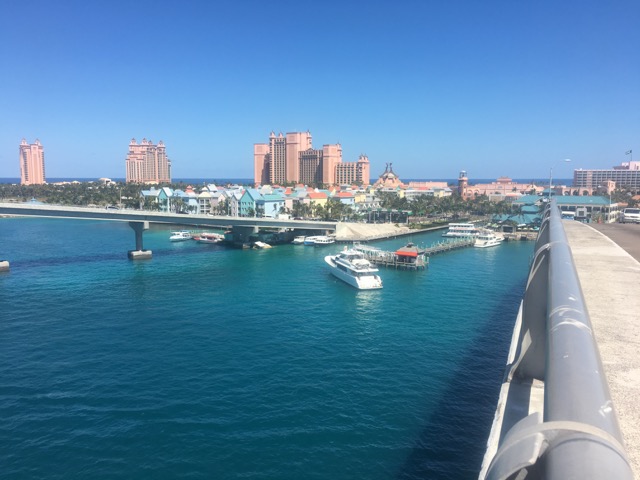 The marina is $4.50 a foot, with free entry to the Atlantis park, not cheap but a very good deal all up. We are the smallest boat by far, with one other sail boat of 65 feet and then all the rest are 100ft plus super-yachts with uniformed crews and jet-skis inside boats inside yachts. We planned to extend it on day 4 but couldn’t due to the impending weekend and the arrival of longer boats with much bigger tips.

After Atlantis fell back into the sea, we stocked up in Nassau, and spent several rocky nights in the port next to the cruise terminal. These ships are massive, eight thousand people, 20 metre movie screen on deck, and roller coasters and ferris wheels on deck. One night there was five of them, and the lights from the cabins and sidelights made the place as bright as day. We were anchored in the lee of the north island, less than 50 metres away, and had to endure the movie and the screams from the roller coaster, until a Jamaican reggae sound system on a party boat drowned all that out. The party boat was nearly empty except for the massive speakers and the ‘toaster’, and went on till midnight playing, I presume, to the one beachside hotel.

The trip a few day later to the Exuma islands were uneventful downhill runs, and we caught several fish. To be precise, we caught mostly fish heads, as the barracuda are pretty quick, and chomp the hooked fish instantly. A mackerel did for lunch, but we lost my favourite lure (australian, pink and blue) after a big bang that took the fish head, lure and wire (what was that!). Max is obsessed with catching fish, but has yet to taste one. Ben has rediscovered fish as a food, and can’t wait to taste a MahiMahi.