Bell Island, a plane wreck, an aquarium and our first grotto

After sadly leaving Warderick Wells we had a slow motor-sail directly into a south easterly, thankfully not too unpleasant, and not too great a distance, so that we arrived to anchor up outside a private resort on Bell Island with just with enough time in the afternoon to dive on a sunken smugglers plane (apparently, a drug runner).  It must have been a very small plane as it looked quite tiny in the water.  Ben was the most courageous on this dive, pulling himself down the mooring buoy line that hung off the plane to get quite near the cockpit.  The current was extreme however, so we moved quickly to a nearby coral garden (known as The Aquarium).  As soon as we dropped into the water we were surround by hundreds of beautiful fish.  They were obviously very used to people feeding them, as initially, there were a few nibbles of our hands and exposed areas.  I think fish are smarter than we think, as they soon realised we were empty handed and settled back into swimming peacefully around us, that is until a tourist boat arrived with bags of fish food.  A frenzy ensued.  Great to watch from below the water line however.

Next day we headed to nearby Rocky Dundas, which has the most spectacular snorkelling caves featuring stalagtites illuminated by the sun through a hole in the ceiling.   When we arrived, the sea was quite swelly and as the tide was rising, it looked quite dangerous to enter the caves.  Pete did a reccy first, and soon waved us in.  I was still a bit nervous about heading in, however after Tom, then Ben jumped in, decided I couldn’t miss it.  Max and I headed in and were amazed at how fun it is swimming into a cave.  What had looked to be fairly rough conditions from the dinghy was actually just a nice gentle swell.  The second cave also had a sandy beach so you could actually get out of the water and walk around.  It’s moments like these you need a Kit Kat (boy do I miss them!).

After leaving the caves our anchorage for the night with less than a mile away, off Compass Cay.  As soon as the anchor dropped we were greeted by one of the local and probably very well know Barracudas we affectionately and very unoriginally named Barry.  Even though Barry spoiled Max’s chance for a late afternoon fish off the deck (we were now outside of the land and sea park) he was very entertaining and certainly enjoined all the scraps we threw him.

Our last activity of the day was a walk across the island to a lagoon on the north end, and the island’s loveliest spot. It borders Conch Cut, an “inlet” from Exuma Sound, and the southern boundary of the Exuma Cays Land and Sea Park. The lagoon is fed by water from the Sound breaking over a notch in the lava rocks, which often causes froth to form on the surface, hence the name , “Rachels’ Bubble Bath”. 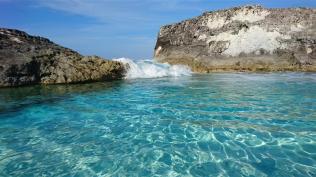 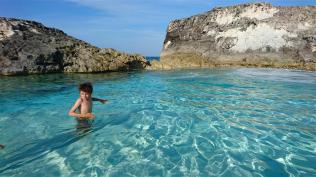 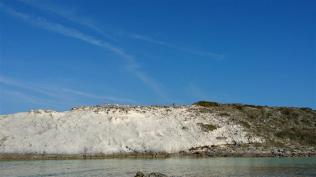 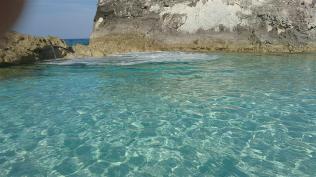 We had a great swim and the boys enjoyed a scramble up the surrounding rocky face to view the seaway that we would be sailing out the next morning, on our way to our next destination,  Staniel Cay, which is famous for being the location of the underwater grotto scene in the James Bond movie – Thunderball. Obviously, this was the movie on the menu after a dinner of the last of our Costco food from Florida – ham steaks, packet mashed potato and packet falafel balls. Surprisingly nice, however we are looking forward to stocking up a little bit in Staniel Cay, both food and water!

1 Response to Bell Island, a plane wreck, an aquarium and our first grotto