We departed George Town on route to the Turks and Caicos islands, coincidentally just in front of Sandy Feet who were heading to Cuba the same day, and exactly 2 weeks after we had arrived.  Embarrassingly, Sandy Feet got to witness us zigzag madly across the channel, whilst we conducted our first potential man overboard activity. Actually, we were fortunate that it wasn’t a member of the crew, just Pete’s favourite new T-Shirt that I had accidentally thrown too hard towards him in the cockpit from the cabin down below.  It sadly sank to the bottom.  A couple of hours later, Ben also lost his favourite fishing teaser, also not recoverable.  I was waiting for the third thing to disappear, however that came a few days later!

We had planned to spend the night at Rum Cay, unless the wind was going in the right direction.  As it turned out, we were too late to anchor at Rum Cay, however the wind was perfect for our first overnight voyage so we just kept going.  I had a kip for a couple of hours after an early dinner, and then took over from Pete around 10 pm, staying awake until 2pm, then back on deck at 5 am the next morning.  The first night was quite scary for me as I had trouble working out which way other boats were heading (not helped by poor lighting on some of the other boats).   Poor Pete had a very disrupted sleep as I got him up a couple of times to double check what was going on with the 2 boats we passed.  The seas were very flat, however,  and we had a nice breeze that meant we could turn the motor off for lot of the night.  Overall, a perfect introduction to night passages.

As the winds continued to be favourable, we just kept on going the next day, rather than risk missing our weather window and end up having to slog into the wind for the final days’ sail.  The day passed quickly, with the boys doing too much technology and back to back movies, but at least we were all pretty happy.  Fishing attempts were also unsuccessful, so my dreams of fresh sashimi have still yet to be realised!

Night two was also uneventful.  This time I only saw one boat, and could immediately work out which way it was going (not towards us thankfully).  Hey, this isn’t so hard I thought!  I had downloaded Jessica Watsons book, True Spirit, and this helped me pass the time of my night shift quickly.  It is quite surreal to be reading her story whilst slipping quietly through the water, with nothing else to see except stars and the dark sky.  Her adventure is quite remarkable, she is from the Sunshine Coast (our hometown), and decided, at the age of 12 (Max’s current age) that she wanted to circumnavigate the world.  She then spent the next four years making her dream happen.  A truly inspirational story, and such a great role model for our kids.  I hope that when our boys get older they will also have such an adventuring spirit (though perhaps not necessarily sailing around the world solo!). 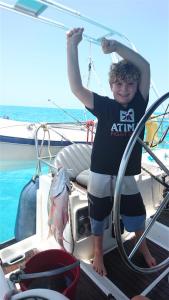 Just after dawn the Caicos Islands appeared on our horizon.  We slowly made our way to Providenciale Island.  As one other sailing blogger put it, the island is no higher than her husband!

Entering the protected banks, still with our fishing lines out, we were very surprised to haul in not one, but two beautiful snappers.  Mmmmm, perhaps sashimi for lunch, or as it turned out, fresh fish fried in butter (isn’t great that butter is now back on the menu as a healthy food!), dipped in Ponzu sauce.  I thought to myself, how easy has this trip been!

Well, I guess I spoke too soon.  We arrived to enter a narrow channel leading to the marina we had planned to berth at for a couple of nights whilst we checked in with customs and immigration, only to hit the bottom just before the entrance.  Luckily we got off after a bit of juggling about, so headed out to anchor up and wait for the tide to rise another foot or so.

Pete hit the switch to drop the anchor, however it was stuck, so after getting him to kill the switch, I quickly lifted the anchor up and over the stuck bit.  Oh oh, wrong thing to do,  the chain had run out in the anchor well, and the anchor basically just crashed into the water.  Pete was not smiling, however we anchored up and I learned the correct way to manage this (remove any slack before dropping the anchor).

Whilst waiting for the tide to rise Tom and Pete headed into the marina to get the paper work started.  I was tidying up the boat which did look like a bomb had hit it (well, after 2 and half days sailing, not unexpected), when I noticed that we appeared to have dragged anchor.  Calling Ben and Max up on deck, it wasn’t long before we realised that we were drifting ashore quite rapidly, so Ben jumped into action, starting the engine, whilst I pulled up the anchor.  What a surprise to find at the end of the chain the anchor had disappeared.  So, the third object overboard was upon us!

Eventually Pete and Tom returned, and after about an hour of searching for the anchor via dinghy (and me circling with Mahia), we had to give up and head into the marina due to fading light.  Apparently, I had shock loaded the anchor when I dropped it with plenty of loose chain into the water.  Oops. I’m very pleased to say that a few days later, after multiple searches, high winds and rough choppy water, we found her!