Our last days in Puerto Rico were spent madly cleaning, repairing and restocking – a seemingly endless task.  Pete had multiple trips to hardware stores, marine stores and one day carried two propane gas tanks a total of 9 kms to get refilled (unsuccessfully as it turned out!).

I always enjoy a restock at Costco’s – not as large as our first time in Fort Lauderdale, but definitely enough dry goods to keep us going for the rest of the year. 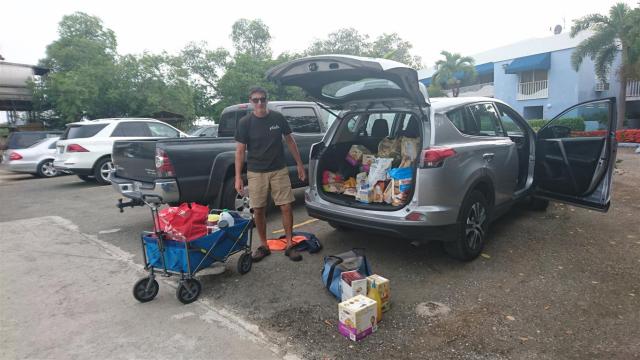 I also managed a first – the first crew member to fall off the boat into a marina.  Fortunately for me it was one of the cleaner harbours! 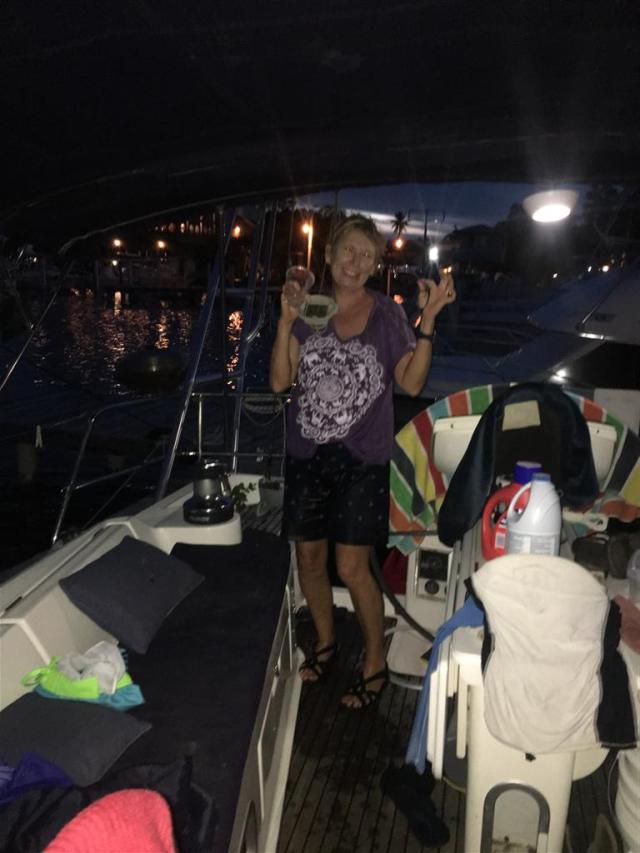 Dripping wet – I was carrying a hand held vacuum cleaner at the time, not any tech gear thankfully, as only the filter of the vaccuum remained!

We had an enjoyable farewell dinner at a local restaurant over looking the water with the other boaties we had been spending time with in the marina. We are all heading different directions as the weather settles.  It has been great to share knowledge and learn where everyone gets their weather information from , particularly with the hurricane season now commenced. All week we had been watching a couple of tropical storms gather and turn into hurricanes down near Granada and off the coast of Mexico. Whilst they are predicting a higher than normal level of hurricanes, the El Nino effect will apparently dull their effect – or so we are all hoping. 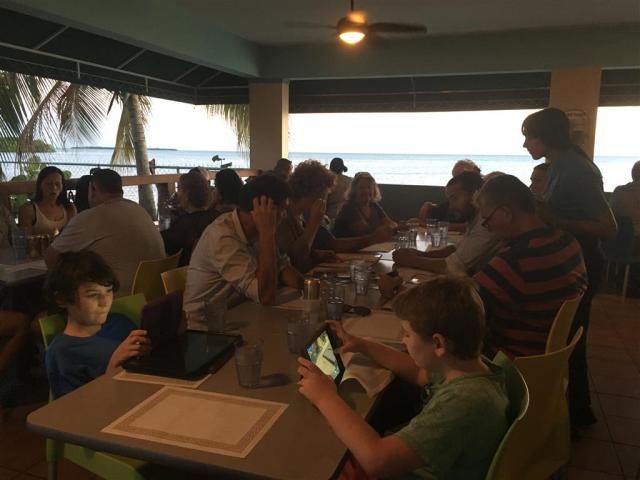 We left Salinas marina at 5am on Friday, heading along the coast a few hours to another pretty seaside town, where we had a short walk and drink at the beach with Abbey and Ben off Wind Machine late in the afternoon after having had a bit of a recovery day on the boat.

After talking with them we decided to change plans and buddy boat with them that night, changing our  route to skip a short visit to Vieques, and instead make a direct run to Calebra in the Spanish Virgin Islands.  We are all a bit sick of the easterly trade winds, and the short hops in the early hours of the morning.

So, last night, I hit bed at 8pm, and Pete set sail at 10 pm for our night crossing.  Pete looked super tired when I took over my shift just after 1pm, having been awake since 4.30 that morning for our pre-dawn run from Salinas. Our trip was pretty smooth, and it was definitely a wise decision.  By about 7am we were off the coast of Calebra, and the wind and waves picked up substantially, bumping us around a bit for the last couple of hours.  I’m so glad we didn’t try this crossing during the daytime hours.

We are now settled in at the Dinghy Dock restaurant, after a tapas lunch, and feeling ready to try some snorkeling for the afternoon to hopefully make us all a little bit less tired and crabby!  Overnight trips definitely take their toll on all the crew, not just those awake all night.

Although hard to see, that’s Pete and the boys on the left side of the restaurant.  In the water huge tarpon are swimming!

Spanish Virgin Islands (although both US territories).  We had left in tandem with Abbey and Ben from Wind Machine, and after listening to their plans, we also decided to skip Vieques join them on an overnight sail direct to Calebra.