Weather seemed in our favour to have a smooth sail to Antigua without too much sailing with the wind on our nose, or so we thought!  With Montserrat looming to our right, and Antigua still a bit of a slog to our left, we made the decision to keep ploughing forward somewhat into the wind, adding a few extra hours on to our trip! 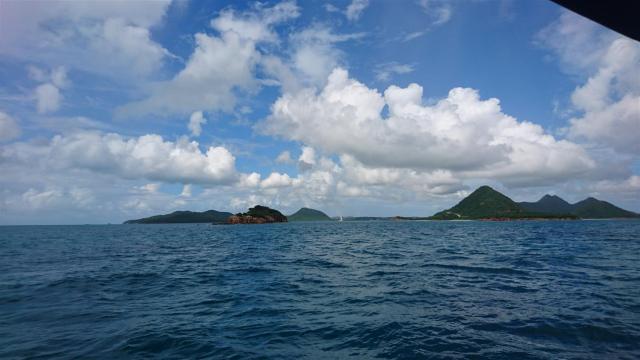 Antigua is a sailing mecca – for several weeks of the year – after that it becomes very sleepy indeed. It has an enormous amount of history being the main British naval base in the important NE corner of the Caribbean. It must have been tense having major fighting ship bases within sight of each other, as Guadeloupe and St Martin are less than a day away. In fact the Dutch and French had rival bases on opposite sides of a pond.

We eventually made it into Jolly Harbour, and it was pretty much a ghost town, although  very lively in the high season.  Despite that, there was an excellent supermarket for  a quick shop, and we left the next day to check out English Harbour on the south of the island.

English Harbour is a narrow dogleg of a harbour protected by rocks and high cliffs with forts on top. The end of the dogleg has 200 metre bridge of land over to Norfolk Harbour which is equally impregnable. The Naval Dockyard has massive sandstone blocks sticking out into the middle, and is a simple pull alongside marina and dinghy dock. The pillars of the old sail loft ruins are now a fancy hotel and bar to sit and watch sunset from.

We were in budget-conscious mode and decided to anchor, as had hundreds of wooden English warships in the past. It must have been a very small navy. Our anchorage was only metres from land with not much room to spare, and i couldn’t imagine more than one boat in here at a time. We had to avoid anchoring over the massive 250 year old ‘hurricane chains’ that spanned the harbour floor at intervals. We saw the links of one on the beach, and each link was bigger than a car tire. 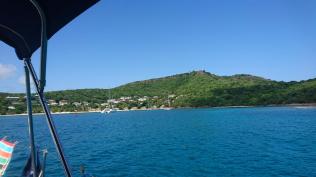 With Tom’s birthday the following day, Ben and Janine headed into the town for some last minute birthday present shopping, only to find very few shops, and nothing that resembled a present except at the closing down sale at Jamie Olivers?? supermarket. Fudge only.  Fortunately, the famous Nelson Dockyards had a couple of souvenir stalls to boost our small bundle of presents.  We had a nice wander around the historic buildings and museum. 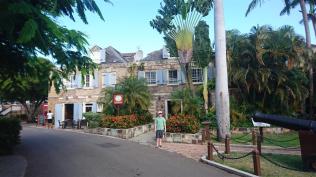 We went for a Mojito at the Sail loft bar at sunset. The boys cartwheeled and tortured each other. The mint in the Mojito was not just muddled, it was more like a Spirulina smoothie, it had been liquidised to green slime 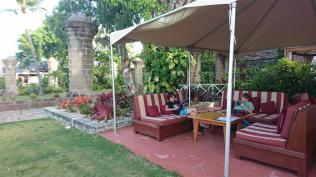 Tom had to be woken to open his presents: a aerospace science kit, book on making stuff from rubbish, “are your smarter than a 5th grader” boardgame, and fudge. Then a surprise trip to a zip-line in the jungle.  Our package included 12 zip lines, the longest being around 350 metres.  It was great fun, although unfortunately we weren’t allowed cameras during the ziplining for safety reasons, so we only have photo’s of us at the end. 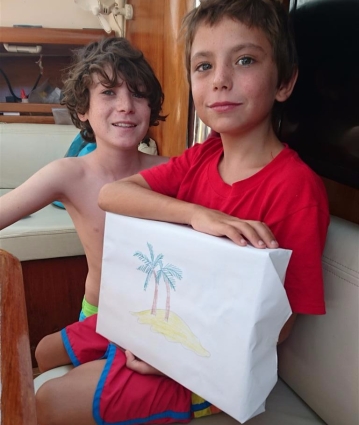 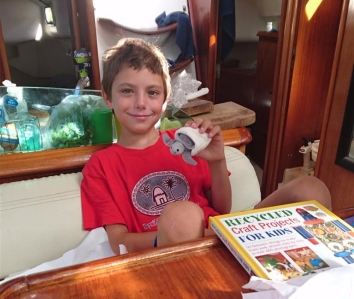 Zip lining – so much fun flying through the trees

Maybe the zip lines weren’t as high and scary as the ones we missed in the DR, but they were a buzz. Tom went first on every one, and didn’t seem to turn a hair, except when one of the guides jumped on behind him to give him an extra shove.

Later that day we went for a drive, much to the kids disgust, as they hoped to find Wifi and wind down. The drive took us to Half Moon Bay were we saw some gentle surf and managed a walk. All in all a good day long day. unfortunately we were setting sail that night.

Half Moon bay – photo worthy of a postcard!

Unfortunately, although you can’t see it in the photo, we left a pile of clothes on the beach, so Pete and Max had make a return trip after we returned to the boat to collect them!

On the way back to the boat (first trip!), we stopped at Fort William, views were spectacular.

We forgot to get icing sugar for Tom’s cake, but it tasted OK, and he seemed to enjoy it at the time. (This was not to be forgotten though, and he cried his heart out later, telling us that we didn’t love him sufficiently to ice his cake).  It was hard to tear both Ben and Tom from their movie to blow out the candles. 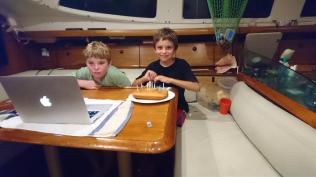 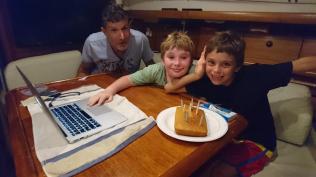 At about nine that night, with no moon to give us light, we slipped anchor in our tiny cul de sac, and threaded our way around the narrow dogleg. We had to use the depth sounder and the torch to keep in the channel, until we could see the lit markers near the entrance cliffs. We ghosted past the dockyard giving people a fright. Once past the cliffs and their forts, it was an easy beam reach to Guadeloupe, engine off, three hour watches.