Renting a car in New York City seemed like a dumb idea, with the suppressed rage of my fellow drivers bubbling very close to the surface. The pedestrians seemed even more dangerous. So we caught the subway to Grand Central Station to get a little further out of town. Grand Central Station was pretty spectacular as far as train station go, with beautiful high stone ceilings and the directions and train numbers carved for ever in marble. We missed our train due to the huge scale of the place, but for a change I had secretly left a large time margin, and the next would get us there in time. Our destination was over the Tappan Zee bridge, at Tarrytown.

Tarrytown is a cutesy little town on the Hudson river right next to Sleep Hollow, of Headless Horseman fame. When I was eight or nine years old, we lived in Half Moon Lane. Reputedly the little path next to the house was where Ebenezer was chased by the headless horseman. The house hadn’t changed ! Lovely views of the Hudson River. 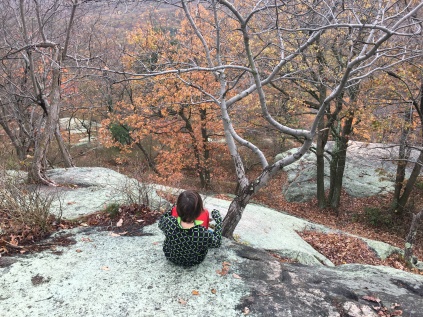 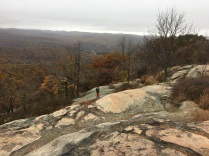 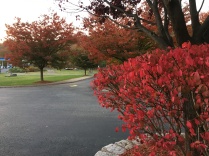 The main destination was the autumn forests of Bear Mountain and the Catskills. The colours were as beautiful as remembered. In order to get them out of the car to play amongst the leaves we stopped at a tree adventure place, where they were sent on an obstacle course high in the trees. They were responsible for clipping themselves on and off the safety clips, balancing on logs and ladders, and onto zip-lines. 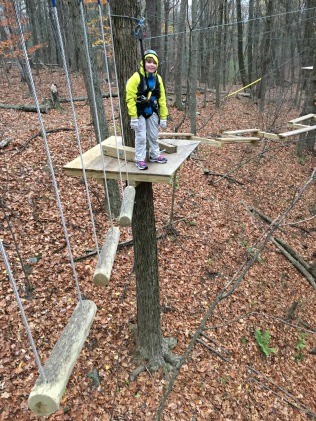 Niagara was next on the agenda, which necessitated a very long drive across the state. We arrived at night fall, delayed by a grilling from the Canadian Immigration about why we were choosing to stay only one night in Canada. His grumpiness wasn’t the hassle of clearing us in , it was his disappointment that tourists don’t stay longer in their beautiful country. He would have been even more annoyed if he had seen us at our hotel, where we discovered that the Four Seasons Sheraton we had been led to by Janine’s Google Maps was in the wrong country. Ten minutes later we were knocking on the door of US immigration to let us back in over the border to get to Four Seasons USA. We carefully avoided eye contact with Canadian immigration.

There was a moment in the carpark of Niagara Falls, the Great Fudge Stand-off. Mum had planned the kids to choose and share some enormous blocks of fudge. Unfortunately when you start with “You can choose your 1 kg block of fudge…” they aren’t likely to remember much of what was said after that…. and so we spent a very tense half an hour in the car, with threats of fudge going in the bin, till sharing agreements were made. We haven’t fully recovered.

The drive back across New York State was long, (about 400 miles ! ) and Niagara falls was impressive, but spoiled by the gaudy metropolis around it. I wouldn’t do that drive again just for the Falls.  Still, we saw some beautiful rural landscapes and autumnal forests on the way back, and most exciting – snow ! A brief flurry of sleet as the temperature dived from 17 degrees to -5 Celsius. The next few days in NYC were torture, with icy winds blasting down canyons of skyscrapers. Our thoughts kept flitting between longing for the blue warm open skies of Oz, to skiing in Japan. If we played our cards right, we could have both!